You don't know me. Well, maybe you do know me, but I know you haven't seen me like this before... my name is Hevvi. And the H is silent! I'm also known as the Heaviside Step Function. I mean, you didn't think this was the complete cast of math-tan characters, did you?

Welcome to Day 5 of "A Week in the Life of a Math Educator". 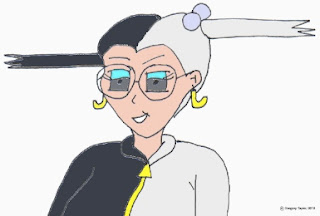 As to a theme song for today, well, yesterday's was impossible to top. So, unless we can piggyback on some more famous tune... I'm guess I'm like, f(u).

Funny thing about today though - it's a Professional Development (PD) day. So if you've ever wondered what goes on during such days... this is not the posting to read. Because Ontario high school teachers are, as I mentioned at the start of this week, taking job action. Which means that, while normally the agenda would be Board directed and effectively a Professional Activity (PA) day - oh, there is a distinction between PD and PA - today teachers are making the choice to do self-directed PD instead.

For context, here's roughly how the last PA day went. After arriving, there's breakfast, a presentation from our Police Liaison about the problems of sexting, a presentation from another teacher colleague about Technology in the schools, some group work involving strategies for difficult students, break for lunch, then meetings in departments to discuss the school improvement plan (SIP) and assessment and evaluation policies of the Board. Which is valuable (well, most of it), but at the same time, is geared more globally than individually.

So, if a teacher didn't HAVE to do that, if they could throw out the agenda and spend a day doing self-directed professional development... what would that look like? What might such teachers end up doing?


They might again wake up before their alarm, wonder why (stress?), and head to their computer to catch up after a night of blogging instead of having read posts. They might finally think they had the time to fully read the DITLife blog of someone else (who commented on theirs), and comment back. They might also not wear a tie, end up leaving the house just after 8am without worrying about being late for class, and even take a moment to muse about the frost on the grass.

They might hear Katy Perry on the radio while driving in, and start singing along, except using the tune "Polynomials" instead of "California Gurls", because it's more mathematical. Well, okay, I find this last possibility highly unlikely for most teachers, but statistically speaking I suppose stranger things have happened. Math educators can be an odd bunch. (Also, that's correct spelling for the original song, because apparently "Poor Literacy is Kewl". Also again, one more more traffic circle yesterday and again today, well done keeping track.)

Such teachers arriving on a PD Day might potentially then get to the prep room at 8:25, the time they'd normally be going to class, and walk down to the staff room with another colleague. Which I'll say is a lot more likely, even taking into account the fact that this would be one particular teacher's first time into the staff room this month. Yeah, it really is way off in the corner of the building, almost like an afterthought after the planners put in the cafeteria.

Anyway, the colleagues might soon find themselves chatting with others while in line for breakfast - ones they rarely have the chance to interact with on a regular basis. The group may even end up sitting together at a table, all the while discussing such topics as: Formal Day Thursday, the format of PD Days past, how having kids can change opinions on teaching, the state of the school play, the fact that Christmas displays are up too early, and the fact that it's colder in the building without the body heat generated by students.

The principal (who was required to create a PD agenda for the day anyway) coming by the staff room is also an option, particularly if it's to bring some flowers to present to the cafeteria staff for a job well done.

Ultimately, teachers in this position might head back to the prep room at about 9:25am, whereby they might work on refining a lesson delivered a few days ago. Seeing as there's no time to really revise such things once they're done, needing to be so focussed on where they'll be going with it tomorrow. After all, revisions, they can happen next time that lesson is needed - like next semester, yes? Or, alternatively, now. Teachers might even relish the opportunity to do a lot of this revision planning, spending most of the morning on it. 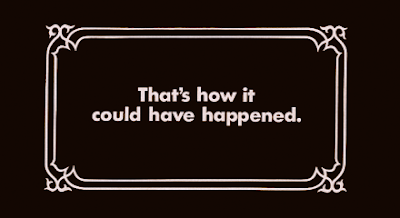 BUT HOW ABOUT THIS?

While some colleagues clue in to doing the above, others, and this blogger in specific, might be doing some marking. For instance, resuming the marking of papers that had been continually getting chipped away at all week. Of course, teachers doing this might have occasional brief interruptions, such as when a Vice Principal comes by to reassure that things will be in place for the Math Contest next week, and then again when they decide to check both their board and internal email... and of course there are occasional conversations with the other math (and family studies) educators.

One teacher remarks in passing that they can't recall last time a PD day was this productive. Another is getting memories of Thursday confused from reading this blog. (John C. Reilly? Okay then.) Yet another has computer issues. And notable, a comment regarding a student from a senior math course, who has a mark under 60. Is this student misplaced? Is this student being forced to take the course by their parents, or their choice of career? No. This student knows they aren't very good at math, but has said they are taking this extra course "because I like it"! Thus perchance they have a greater incentive to continue, compared to other students.

Lunch, in many such scenarios, would be announced before noon. Teachers who are like the one blogging though, who are close to finishing the set of tests? They might prefer to keep going. They might also be inclined to ponder the fact that they've done 2 hours of marking as self-directed PD. But when you consider that there are PD days at the end of the school year, which are pretty much only for frantic marking in order to get totals together in time for commencement... it's not that unusual. Moreover, this stuff has to get done, so this might actually free up a couple hours on Saturday. Then again, since test totaling is yet to be done, probably not.


It's a reasonable assumption that most teachers on this day would eventually get upstairs, to the library, for lunch, before 12:15pm. There, they might have the chance to talk with some educators who are different people from that morning. Topics now being such things as: Sports pools, how factors in getting teachers together during a regular day might include school size and necessity, the troubles with the economy, and how classes are going in other departments.

After lunch, teachers are willing to help put away the plates and cutlery, as leftovers are brought down to the custodial staff. They'd then all return to their offices. Again with an eye to this blog though, there is the matter of a car still at the garage... and checking voicemail reveals a notice to phone to arrange a pickup. This is done. Then, having made one phone call, an educator may feel they're on a roll, and they would then phone parents regarding missing assignments - this being the calls that were not done late yesterday. (Hating the phone, that's not necessarily unusual, but phoning earlier rather than later can alleviate stress.)

By this point a certain teacher, or perhaps by extension most teachers, would at least consider networking with someone else teaching the same course as them. At 1pm this happens here, and they both look over a course summative as suggested by another who taught the course previously. Though this being finance work, and there being those who find it worse than phone calls, it does necessitate actually going through and creating a personal solution set too. That done, they can discuss tweaks, leaving only the final individual planning for Monday.

But with it now being 2pm, why not finally do some more fun self-directed PD? After all, in addition to the songs by the math-tans, there are many other students and staff in the world setting math concepts to music. This is the point in the day when they turn up... the f(u) link "theme music" was found at this time, along with some others that also connect to calculus concepts. These songs can be added to a certain list being compiled, even if they are a bit beyond high school.

Conceivably, there is also the opportunity today for all interested teachers to fully catch up on email. Connected to this, they might scan through the email links to a backlog of "Technology Times" articles, a weekly publication within the Board. (A couple items are bound to be Tweeted later, if anyone's interested!)

Finally verging on 3:30pm. Many have left since the day officially ended a half hour ago, but some remain. They may still have a few key things left to do, such as creating a summary file of teacher courses for their Gr 12 data class. Not being aware of any easy way of grabbing this data, it's entered manually, flipping between windows, which fortunately only takes about half an hour (and saves needing to do it Monday).

Teachers, they came and go at all times, and this time of year, it's usually dark for the goings. But there is still light at 4:15pm when they might be leaving to pick up their car, were they to have left it for service at a garage the day before. Upon arrival, the loaner can then be swapped out, and the car with new winter tires would get driven home.

The blogger and his math-tan thoughts, they are indeed home for about 5pm, which means they are the first arrivals at the house. At this point, there is a good chance they choose to write up their blogging, but fall asleep in the process, waking up only at midnight, having completely missed dinner.  They would post, and go back to sleep. 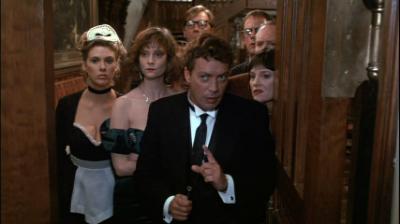 BUT HERE'S WHAT REALLY HAPPENED...


They begin a writeup of their blogging, including doing some additional sketches. Their wife comes home, and they have something quick and microwavable to eat. Eventually, before 8pm, they head out to a birthday celebration for a friend.

Following that, and returning home before midnight, the blogging resumes, until the point that has now been reached. It takes longer, in part because writing in third person plural style is somewhat more difficult than many might have first anticipated. 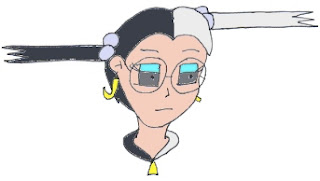 As for the somewhat hypothetical nature of this entire post... well, again speaking as Hevvi (the H is silent!), I may also be theoretical. Certainly I'm non-canonical until Logan's Gazebo chances to find me. Whether that happens sooner or much later will have at least some connection to the interest, or lack thereof, on the Other Blog, of Math Personification. The one involving the characters you have seen this week. So feel free to comment here or there; worth doing?


Final thoughts on this entire experience will be posted this Sunday, so come on back then!  And as always, Tina's roundup of other educator posts is at her site, Drawing on Math: Day in the Life, Part 4